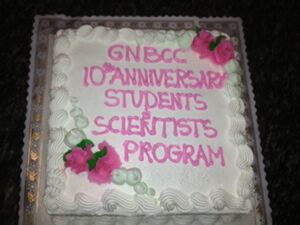 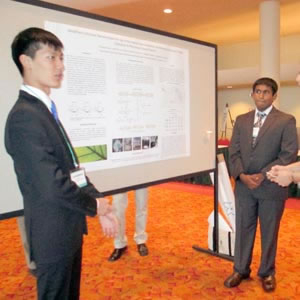 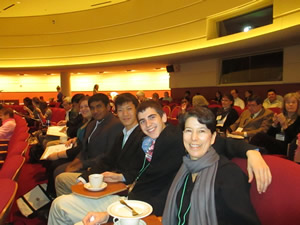 GNBCC at the BCERP conference in Madison with 2013 sponsored students 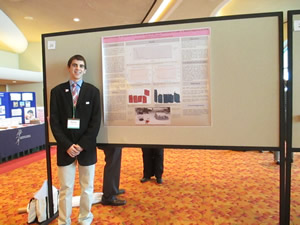 Sammy Hijazi, who interned at Warner Babcock Institute for Green Chemistry, displaying a poster of his and Justin Baroukhian’s summer research 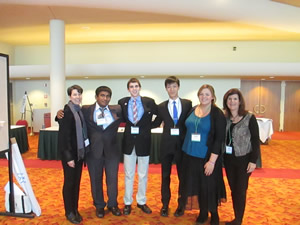 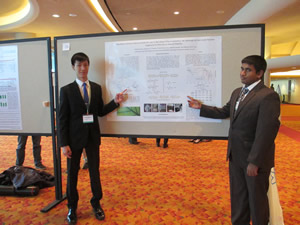 Lawrence Lin and Prasanth Kurup displaying their poster of their summer research at NYU Poly Tech during 2012 and 2013. 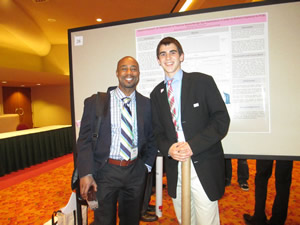 Gary Ellison, Ph.D of the National Cancer Institute and Sammy Hijazi at the BCERP Poster session.

Christine Lee and Kaeli Groenert in front of the Tufts University School of Medicine building where they interned in summer 2013 at the Soto/Sonnenschein Laboratory. 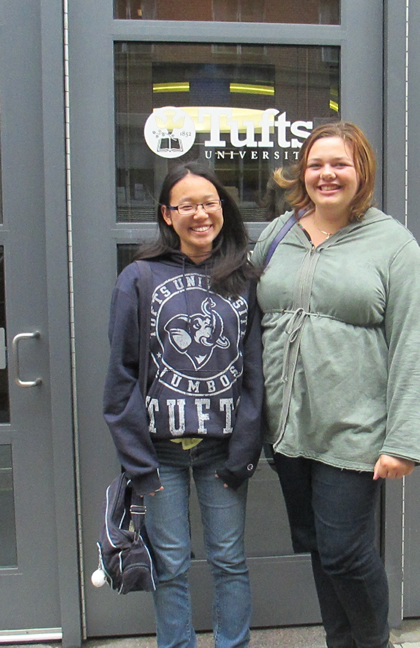 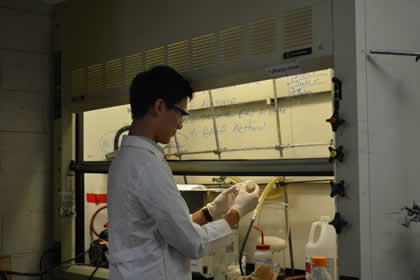 “Thank you so much for sharing your presentation with me. You are all doing special work. On behalf of myself and my family and the State of New York, thank you!” 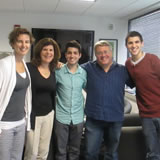 Justin and Sammy were selected and sponsored by the Great Neck Breast Cancer Coalition’s Students & Scientists Breast Cancer/ Environment Research Internship Program. Their research focused on whether a polymer called VBT (vinylbenzyl thymine) would work as a dye stabilizer since PCB’s found in dye stabilizers have been linked to cancer. The two interns applied the polymer to fabric, irradiated it using UV light and evaluated the density of the dye using digital images. Their experimentation focused on the concentration of dye, techniques for applying the coating and drying the fabric along with variability of UV light. After less than a month of working diligently in the lab, the two interns had found that their experiment provided solid evidence that VBT coated fabrics did appear to hold the dye better than the control fabric. Through this internship, Baroukhian and Hijazi had gained experience working in a lab and were able to learn important skills such as proper lab and safety procedures and how to utilize machines such as the scanning electron microscope and UV cross linker. For both Baroukhian and Hijazi, the experience at Beyond Benign and WBI was both unforgettable and immensely rewarding. Baroukhian said “The scientists were very welcoming and took time out of their days to give advice and tell stories about how they got to where they are now. We came with a high school chemist’s knowledge and left with a knowledge that was far beyond that.” 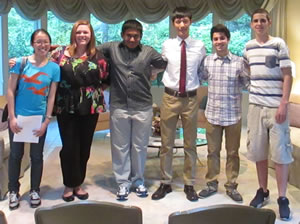 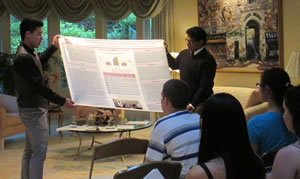 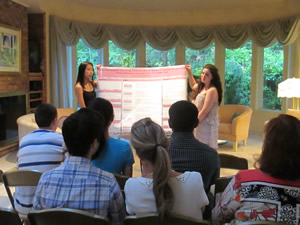 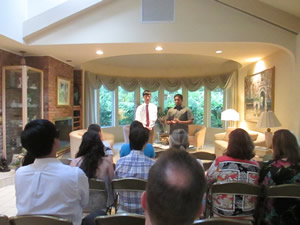 Lawrence Lin and Prasanth Kurup discuss their internship at NYU Poly Tech in 2012 on the development of safer plastics through green chemistry. They will return to NYU Poly Tech for another internship in summer 2013. 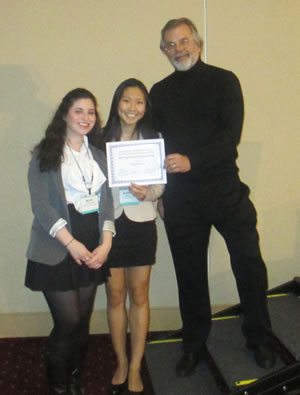 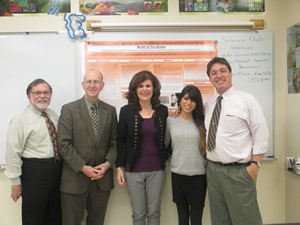 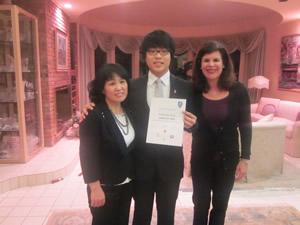 Jeong Yun (John) Yang of Great Neck South High School was sponsored by GNBCC at Stony Brook University through GNBCC’s Students & Scientists program. John began his internship in July 2011 and will continue in the GNBCC program through Summer 2012 working on the the toxicity of nanoparticles and their effect on breast cancer. John was honored by the GNBCC board for the research which won him the Intel recognition. 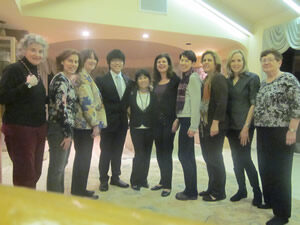 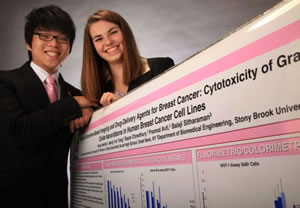 Photo credit: Newsday/John Paraskevas | Student scientists John Yang, 18, and Kayla Neville, 16, pose with the poster they used to present their findings about the toxicity levels of nanoparticles. (Jan. 5, 2012)

Earlier this month, researchers at the Genesis Breast Cancer Prevention Center at the University Hospital of South Manchester, England, released the results of a three-year study that measured the concentrations of five parabens at four different locations across the human breast using human breast tissue collected from 40 women undergoing mastectomies for primary breast cancer (J App Toxicol.Jan. 12, 2012). This most recent study found one or more paraben esters in 158/160 (99 percent) of the tissue samples, and in 96/160 (60 percent) all five esters were present.

John Yang of Great Neck South High School and Kayla Neville of Commack High School are honored in this video by Senators Martins and Flanagan in the New York State Senate on March 5, 2012 for the work they conducted at Dr. Balaji Sitharaman’s Laboratory through our “Students and Scientists United for Breast Cancer Prevention Research Program” 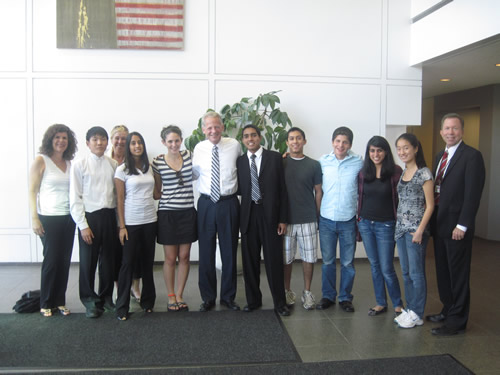 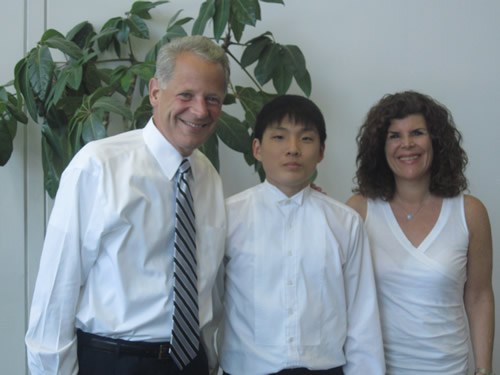 Congratulations to the GNBCC and HBCAC Student Interns for Summer 2011 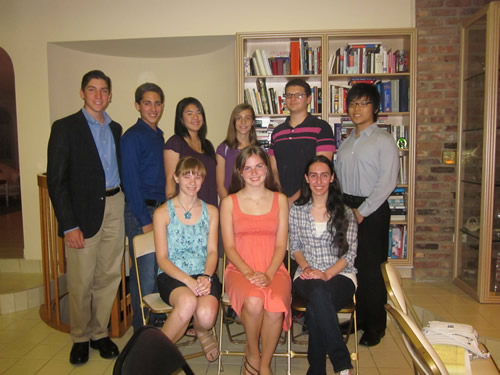 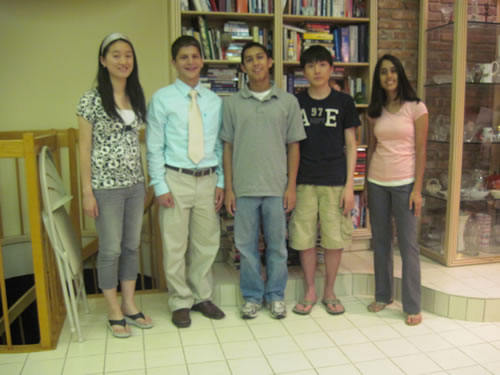 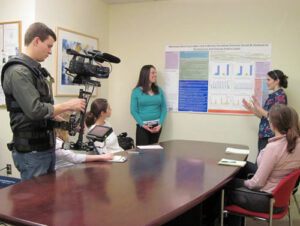 On April 5th, Zoe Schacht-Levine (left) of Great Neck North High School and Aliyah Cohen (right) of Huntington High School were video taped for their 2009 summer internship experience at the world-renowned Silent Spring Institute in Massachusetts,sponsored by the Great Neck and Huntington Breast Cancer Coalitions.The two students displayed their poster seen in this photo at a recent national conference. In the video taping both Zoe and Aliyah explain the details of their poster on mammary gland carcinogens and endocrine disrupting chemicals found in personal care products. For more information on the important breast cancer/environmental research being conducted at Silent Spring Institute go to: www.silentspring.org.

Heidi Park, 2007 alumni student of the GNBCC internship program and of Great Neck South High School, now a sophomore at Wellesley College, initiated and helped organize an educational presentation through the Wellesley College Biology Department called: “Our Stolen Future: Endocrine Disruptors, What They Mean for Us and What You can Do”.

Maricel Maffini, Ph.D spoke about endocrine disrupters, including Bisphenol A, and their association with several adverse health effects including breast and prostate cancer. Laura Weinberg also presented by identifying several endocrine disrupting chemicals and gave examples of how to avoid them.

Thank you T. Kaye Peterman, Ph.D, Chair of the Biological Sciences Department and the entire Biology Department at Wellesley College for coordinating this presentation. 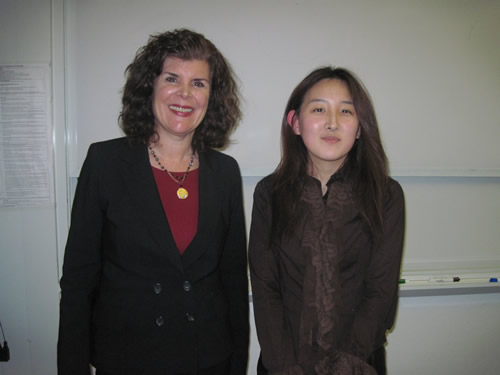 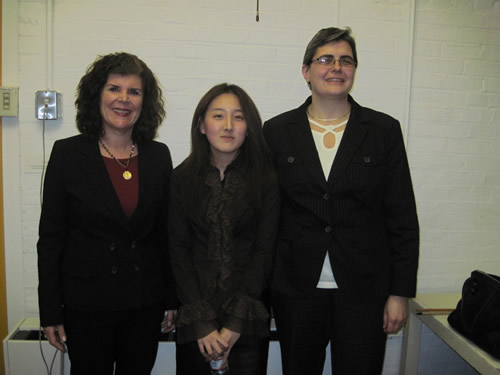 Karolina Woroniecka from G.N. South High School and Regina Roofeh from G.N. North High School receive a certificate of excellence from the Breast Cancer Environmental Research Centers for their poster presentation on 11/14/08. 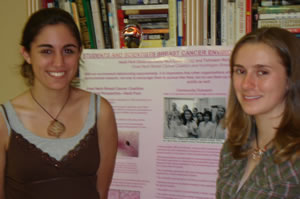 Regina Roofeh (left) from
Great Neck North High School and Karolina Woroniecka from Great Neck South High School are the summer 2008 students who will intern at the Soto/Sonnenschein Laboratory at Tufts University Medical Center under the GNBCC internship program. 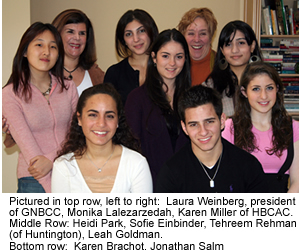 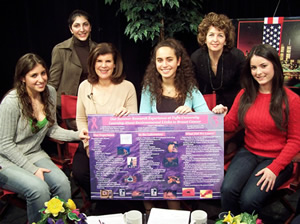 Students who have been awarded the GNBCC scholarship in 2005 and 2006, Karen Brachot, Leah Goldman, Monika Lalezarzedah, and Sofie Einbinder. In center of photo is Laura Weinberg, president of GNBCC, and Bonnie Graham, host of Cable TV show, “Something to Talk About”. The show with the students aired in January 2007

The Student/Scientist program is growing. Since 2005, there are now seven students who have worked at laboratories which address environmental links to cancer. 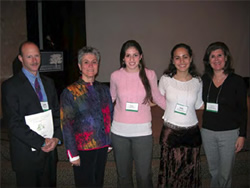 GNBCC trailblazing students, Leah Goldman and Karen Brachot in 2005 at Breast Cancer Environmental Research Center Conference (BCERC) where they displayed a poster of their internship at the Soto/Sonnenschein Laboratory at Tufts University School of Medicine.

As well as assisting with breast cancer/environmental research at the lab, the two Great Neck students, Karen Brachot and Leah Goldman, had an in depth education in cell biology and a hands on laboratory experience. Both Karen and Leah described this internship program “as one of the best experiences they ever had.”

Special thanks to Ana Soto M.D., Maricel Maffini Ph.D, Carlos Sonnenschein M.D., Laura Vandenberg, Ph.D., Tessa Murray Ph.D and everyone else at Ana Soto’s Laboratory for helping us initiate this program and for the gift of giving our students, the next generation of scientists, a summer learning experience that they will never forget.

Also, special thanks to the Great Neck Public School District for all of their help in getting this program off the ground; and to our two trailblazing Great Neck students, Karen Brachot and Leah Goldman, for making this program a success and setting an example for students around the nation.